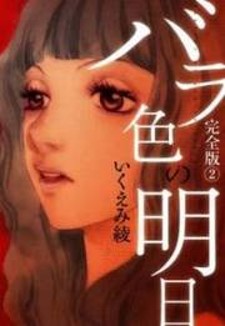 From JShoujo Scans • I Can Hear the Ghostly Drum-Beating The first guy Rika ever falls for turns out to be her older sister’s fiancé. However, her sister’s dream since she was a child was to be a bride, and ever since her engagement to another guy didn’t work out a few years earlier due to her not being able to conceive, Rika swore to do everything in her power to help her sister fulfill her dream. Does that include helping her marry the guy that she’s in love with?! • Like Snow Falling on Harbor Yori runs into Kurita, a girl he knew from basketball club back in high school. Back then, she was a quiet girl who had a quirky oddness to her. When he runs into her out of coincidence two years later, however, he finds that she’s become an out-going (if not slightly high-strung) girl. A few weeks after their chance meeting, he receives a phone call from the hospital saying she had tried to kill herself, and he finds out the true reason for the drastic change. • Fight! Yuki’s a hard-working 21 year old who’s tirelessly slugging away as a coordinator at a English language school so that she can save enough money to go study abroad. She has no interest in guys because she’s so set on her goal—that is, until she meets Yuki, a guy with the same name as her. They move in together only days after they met, and at first things go well, but one day, he hits her in the face by accident. The violence escalates as the days wear on — will their love last?! • The Days of the Sun Nana and Ichi are twins who are as close as can be. Sure the people around them think it’s odd that they still sleep in the same bed — but they couldn’t care less what others think. All they need is each other. One day, they run into a scruffy looking man wearing dark sunglasses who claims that he’s their long-lost dad! Is it really him? And why did he choose to reveal himself to them now? Includes other stories which all center around the theme: “a rose-colored tomorrow.”